I attended the Parkinson’s Academy MasterClass in 2012, as a final year neurology trainee. At that time, I had already decided on a career in Movement Disorders, and had a fair amount of experience under my belt already. What I was looking for, amongst other things, was to ensure that my knowledge was as up-to-date as possible, before taking the plunge into a consultant post. I was also hoping that the course would give me a little insight into what it is like to be an NHS consultant. Lastly, I was looking forward to the opportunity to meet other, like-minded individuals, perhaps from different training backgrounds, so that I could begin to develop a mini-network, which might stand me in good stead when I took up my post.On all three counts, the Parkinson's Academy MasterClass was a resounding success. I found the quality of the lectures extremely high, and the sessions on building and running a service really helped, once I was actually in post. I have also remained in touch with several of the delegates from my year, and it has been helpful to be able to drop them an email, or give them a ring, when the inevitable “bumps” occurred along the way.I was absolutely delighted to be invited to become part of the faculty, a few years later, and it is always one of my highlights in the year, to come back to the Academy again, and deliver a session or two, hoping that they will prove useful to somebody else starting out on the ladder.Currently, I am working a busy general neurology job, in The James Cook University Hospital, Middlesbrough. Around half of my week is dedicated to movement disorder work, with the other half made up of general neurology clinics, ward work and on-call duties.I set myself a one-year, three year, and five-year plan, at least in my own head, at the start of my job. The one-year plan was just to get an idea of the lay of the land, in terms of service and personnel. Before you change much, you have to understand what is already there, and, if possible, what the barriers are to change. The three-year plan was to have expanded the Parkinson's service, so that we could see struggling patients more quickly, and more comprehensively, and improve access to mental health services.At the start of 2015, our service was awarded a Health Foundation Innovation Award. The grant, worth £75,000, allowed us to set up a Parkinson’s Advanced Symptoms Unit, designed around a day-hospital template, and staffed by an expanded multidisciplinary team, including neurology, nurse specialist, pharmacist, physiotherapist, occupational therapist, therapy assistant and community psychiatric nurse input. The clinic is resourced to see patients for much longer than the standard outpatient appointments, and reaches out into the community, where it is based, so that home visits can be undertaken by members of the team.Quite deliberately, we do not book appointments for patients much in advance, allowing us to respond more rapidly when crises occur. It has taken quite a lot of the pressure off our shoulders in the “normal” movement disorder clinic, knowing that we can bring people along at short notice, and give them the time that their problems deserve. The service has also helped us to reduce the overrun that was a common feature of our more traditional clinic, and opened up slots, so that we can see new referrals more promptly as well.The Health Foundation grant gets us off the ground for year one, and we are now in negotiations with the clinical commissioning group (CCG), and our own Trust, to see if we can provide compelling enough quality, and financial, outcome measures to make the service sustainable in the longer term.One of the other projects that we have been working on, for some time now, is an Integrated Care Pathway (ICP). This has been a huge undertaking, requiring many hours of stakeholder meetings, and much bashing of heads against walls - predominantly my own! We now have a range of simple, one-page pathways, posted on the hospital intranet, which clinicians can refer to, when looking for “best practice”in the Teeside region. At present, we are working with some web designers, from Teeside University, to see if we can transform the rather “static” pathways into an interactive, web-based format, which will give the ICP greater reach, and make it a little more user-friendly. Watch this space.Lastly, for my sins, and perhaps because I am loud-mouthed, and have a constitutional inability to say “No”, I have also become the chair of the Parkinson’s Excellence Network for the North East and Cumbria. I know I am not alone when it comes to ex-delegates, and indeed current faculty members, who have become heavily involved in the nascent networks. It is still very early days, but we’re beginning to see benefits already emerging from more joined-up working, both within our own region, and within the country as well. If you get the chance, I would strongly urge you all to pitch in. The more people we have, the more ideas, and the more energy, the better the networks will work.It has definitely been a busy few years and, when I reflect on how far our service has come, in a relatively short period of time, I feel a great degree of satisfaction. There is no doubt in my mind that, without the skills I learned on the Parkinson’s Academy MasterClass, and the contacts I made there, I would not have been able to hit the ground running in the way that I did, back in 2012.Best of luck for your own plans. If you’ve made it through the MasterClass, you stand a great chance of making them a reality. 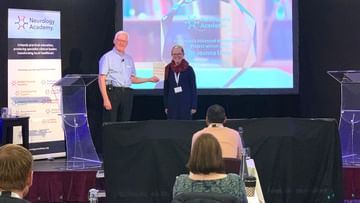